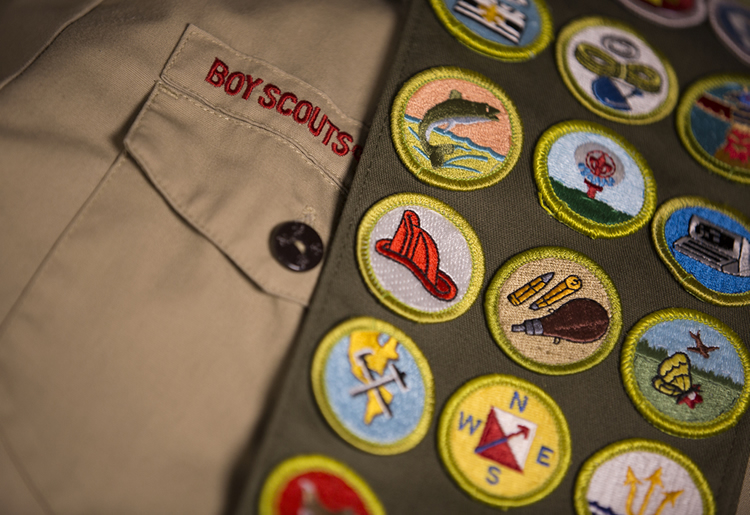 Thousands of people all over the U.S. are now filing lawsuits against the Boy Scouts of America (BSA) for sexual abuse. If you or your child was a victim of abuse while in the Boy Scouts, you may be entitled to financial compensation.

Your right to sue the Boy Scouts for Molestation

While the BSA recently urged victims to come forward as the organization filed Chapter 11 in hopes of surviving the barrage of child sexual abuse lawsuits coming against them, the deadline for filing claims may end soon. Specific deadlines will be up to the court. The amount of money victims will receive will likely depend on what assets are turned over by the organization and how many come forward. Contact an attorney as soon as possible in order to find out what your legal options are. 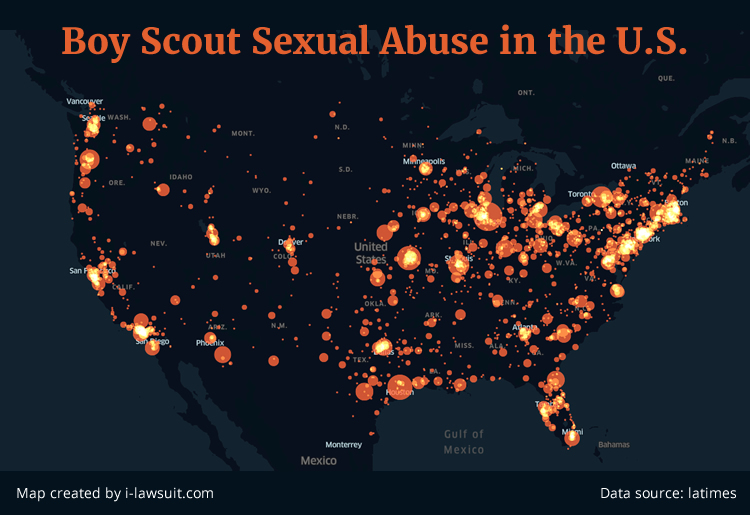 As the map above shows, thousands of people all over the U.S. have reported sexual abuse by someone in the Boy Scout organization. Larger circle sizes indicate cities where cases of sexual abuse have been documented, but there are certainly many, many more that have gone unreported and many not represented on this map.  The brighter clusters of colors show regions of the country where much of the abuse has taken place over the years.

In the past, many adults who were finally ready to come forward and seek justice after being sexually abused as children found it was too late to do so because of the statute of limitation laws. A lookback window gives abuse survivors a chance to bring a claim that was previously barred by such statutes.

Several states now have such laws in place. Some states have provided a two-year lookback (D.C. and New Jersey) while California is offering a three-year period beginning in January of 2020. Vermont is one state that has completely abolished the statute of limitations for childhood sexual abuse cases.

Other states that have opened up lookback windows:

How could the Boy Scouts of America allow this sexual abuse to happen?

Like other organizations entrusted with the safety of our youth, the national organization of the Boy Scouts of America was once a trusted organization with millions of members. They betrayed that trust when they protected the abusers instead of the abused.

From years of confidential files kept hidden by the BSA, it was discovered that officials within the organization urged sexual offenders to “quietly” resign as a way of preventing scandals of sexual abuse. According to the L.A. Times investigation of the case, most of the allegations of abuse against adult leaders were never placed into the legal system; they were never reported to police at all.

Are you entitled to sue the Boy Scouts of America and receive compensation?

If you were inappropriately touched by a scoutmaster, shown pornography, forced to participate in or watch sexual acts by an adult while under their care, you certainly may have a case. Such acts constitute a breach of responsibility and expose the individual and organization to liability for injuries and damages for illicit misconduct.

Several such abuse lawsuits have already taken place. Like other lawsuits seeking punitive damages against organizations such as the Catholic dioceses and U.S.A. Gymnastics, civil lawsuits were also being explored against the BSA for its part in failing to prevent child abuse.

Is my case confidential?

Your consultation is always confidential. Abuse victims should never remain silent. Sexual predators should not remain unpunished. Contact an attorney today to seek justice for the crimes committed against you or your loved one.

Additional Information on the Boy Scouts of America Lawsuits and Bankruptcy

Until February 2020 when the organization filed bankruptcy, Boy Scouts of America (BSA) was the largest youth organization in the United States. Established in 1910, BSA was modeled after its Britain counterpart, the Boy Scout Association.

For the most part, men organized camping trips for young boys; volunteers who, in their off hours, promised to model manhood and to teach boys to grow into responsible leaders of the community. During the day, most worked as teachers, lawyers, police officers, or were retired Scouts themselves.

Now, 110 years later, the organization has declared bankruptcy due to the ever-mounting lawsuits against it for  the sexual assault of countless children. While one expert estimated that between 1944 and 2016, at least 7,800 suspected assailants had sexually abused 12,254 boys, she also testified that these numbers were likely a “gross underestimation” of the real numbers of boys actually harmed.

Based on the “Perversion Files” containing information on approximately 5,000 BSA suspected child abusers, the circles on the map above indicate the location of troops connected to those accused of abuse.

For nearly a century, the BSA knew it had a problem. It knew that scout leaders were preying on boys under their protection and that they were doing nothing about it. They knew that they were not bringing these predators to justice or getting the boys the help they needed. They knew it, and locked those secrets away in a place called the Perversion Files (it was actually called the ineligible volunteer file).

Kept since around 1920, the system was used so that known abusers could not rejoin scouting, and while the rationale was to “protect boys,” the system failed in that it kept the abusers’ secrets and never addressed the damage that could be done to other boys in the future or to the victims themselves.

Sadly, there was never a change of heart that brought these files to light, but an order of the court that made them public in 2012.

The problem of sexual abuse has obviously been rampant in this organization, with thousands and thousands of victims reporting some form of sexual assault over the years.

Over 110 Years of Hidden Sexual Abuse

The numbers are much greater than the data below shows. These counts show totals from the only publicly documented database produced by the LA Times. The team at i-lawsuit.com analyzed the data and created totals by city and state. The table below shows any city where there were 5 or more cases of abuse.

Being preyed upon as a child is never your fault. Your story deserves to be heard. Abusers who take advantage of and prey upon children need to be punished. Don’t wait, though, as the time to file claims before the opportunity passes is gone forever.

Who Do You Call for Help?

Contact us today and we will connect you with the best lawyers in the country to help you figure out if filing a lawsuit is the best option for you. You are able to remain anonymous to the public even if you file a lawsuit.

CBS News. (2020). New lawsuit could allow boy scouts to file sex abuse claims even if the statute of limitations has expired in their states. https://www.cbsnews.com/news/bsa-lawsuit-boy-scouts-of-america-faces-new-lawsuit-that-could-allow-more-scouts-to-file-claims-today-2020-01-06/

Previous post What is an Estate Plan, and Do I Need One?

About the Author Pamela Perez