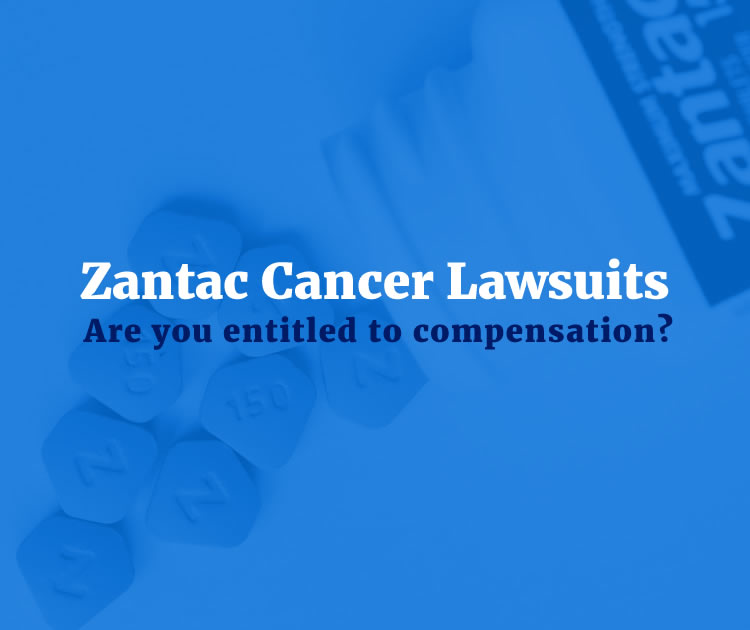 Are you looking for a Zantac cancer lawyer? If you are considering filing a Zantac cancer lawsuit, you’ve come to the right place. We are currently providing free Zantac lawsuit case evaluations. If you or a family member has been diagnosed with cancer and you have been taking Zantac, you may be entitled to compensation. We will fight to get you compensation for the following:

Our investigations have found that the makers of Zantac (large pharmaceutical companies Sanofi and Boehringer Ingelheim) hid information that shows Zantac causes cancer from the millions of people who took the drug to treat heartburn, gastric ulcers, GERD (gastroesophageal reflux disease), sour stomach, acid reflux, and other related issues. Once again, a large pharmaceutical company has put making profit a higher priority than the lives of people taking Zantac (ranitidine hydrochloride) as thousands of people are now coming forward with cases. Zantac became the first drug to generate $1 billion in sales.  Now, it’s time for these companies to pay those that were harmed from taking Zantac.

If you or a family member took any of the following products and you have been diagnosed with cancer, contact our Zantac attorneys today:

We are currently accepting Zantac cases where those taking this medication have been diagnosed with any of the following:

Why are people filing Zantac Lawsuits?

On April 1, the U.S. Food and Drug Administration (FDA) called for the immediate recall of all Zantac products and products containing its active drug, ranitidine – citing concerns that a byproduct of the drug may cause an elevated risk on cancer after regular prolonged use. This sweeping recall is a culmination of voluntary recalls after an investigation into Zantac showed unacceptably high levels of NDMA, a known carcinogen that has been shown to cause cancer in both humans and animals. As a result, those who have been diagnosed with certain forms of cancer after regular use of Zantac and similar generic ranitidine products may be eligible to file a lawsuit against the manufacturers for their negligence.

Prior to the findings regarding the FDA recall, at least 15 different pharmaceutical companies were manufacturing generic versions of Zantac.

How Do I Qualify for a Zantac Lawsuit?

In order to qualify for a Zantac or ranitidine cancer lawsuit, you may have to fulfill certain requirements:

It is important to note that these factors are simply a guideline to understanding the ideal patients who may qualify for a Zantac lawsuit. Because the specifics regarding qualified clients depend on the attorneys, it may be best to consult a number of different law firms to inquire about your potential qualification for a lawsuit.

In response to these findings, many consumers have already filed lawsuits against Sanofi and other manufacturers of generic Zantac for their negligence. All pharmaceutical companies and drug manufacturers have a duty of care to their customers to ensure that their drugs are actually treating patients, rather than harming them. By failing to ensure the safety of those taking their medication, they may be held financially liable for any injuries that result.

Additionally, if there are any potential side effects, they are legally required to disclose them to any patients they may be servicing. Failure to properly warn the consumers may make them liable to any punitive damages.

In the case of the ranitidine manufacturers, they not only failed to properly disclose the risks of ranitidine use, but also failed to properly monitor and evaluate their drugs to ensure they are safe for regular use. Because of this, those who may be impacted by this recall and findings may be eligible to file for a class action lawsuit or a personal injury claim.

What is the Difference Between a Zantac Class Action Lawsuit and a Zantac Cancer Lawsuit?

It may seem confusing to differentiate between a class action lawsuit and a cancer lawsuit. However, there are very clear distinctions between the two types of lawsuits:

It is recommended to consult an attorney who has experience in  handling dangerous product lawsuits for further questions regarding your options for a lawsuit against any manufacturers of Zantac products. Our Zantac cancer attorneys handle all cases on a contingency fee basis, meaning you pay nothing until the time when we get you financial compensation.

Why is Zantac and Ranitidine Dangerous?

In 2019, a third-party lab conducted an analysis of over-the-counter Zantac and found abnormally high levels of N-nitrosodimethylamine (NDMA) in the drug. NDMA is a known carcinogen that has been linked with several forms of cancer in both animals and humans.

Numerous studies throughout the years have shown an overwhelming link between NDMA exposure and cancer in animals such as rats, mice, and hamsters. NDMA is already an incredibly toxic chemical in rodents; high levels of NDMA exposure over a period of a few days or a few weeks has been shown to cause fatal, non-cancerous liver disease in these animals.

However, studies have also shown that lower levels of NDMA ingestion regularly over a period longer than a few weeks can cause liver and lung cancer in these animals as well. These animals received NDMA through food, drink, or through the air – in all circumstances, there was shown to be a conclusive, definitive link between NDMA exposure and cancer development in experimental animals.

The manufacturers of Zantac, Sanofi, claim that there no epidemiological studies that link NDMA exposure to a higher risk of certain cancers in humans. Indeed, according to the World Health Organization (WHO), several studies have been conducted on NDMA and they do not state an elevated, quantitative risk of cancer.

However, the risk of cancer in humans via NDMA exposure has never been thoroughly investigated. Additionally, despite there being no quantitative risk, the WHO does mention that the studies confirm a positive association between NDMA consumption and either colorectal or stomach cancer. Further, all of these studies only based their research on the estimated dietary intake of NDMA – failing to address the impact of NDMA consumption through contaminated drinking water.

In response to the analysis of Zantac, manufacturer Sanofi claimed that the lab’s results were not feasible under real-world conditions. According to their research, Zantac allegedly broke down into NDMA only when exposed to extreme conditions – and in the third-party analysis, it was indeed heated to an extreme level, approximately 26 degrees Fahrenheit.

In response, the third-party lab conducted another test using a modified technique in which Zantac was heated to 98.6 degrees Fahrenheit in simulated gastric fluid – an analog for the conditions in a person’s digestive system. Under this testing, high levels of NDMA were also found – a result that Sanofi has neither confirmed nor denied.

The FDA Expands Recall of Zantac

However, on April 1, the FDA announced a request to remove all Zantac and ranitidine products from the American market. Initially, they found low levels of NDMA in ranitidine products and there was not enough sufficient evidence for the FDA to recommend a full recall. However, further investigation found that the amount of NDMA in Zantac increased over time and when stored at temperatures higher than room temperature.

This new testing confirmed the third-party lab results, finding that NDMA levels in ranitidine increase even under typically normal storage conditions – and that NDMA levels rise significantly when stored in higher temperatures. This includes the range of temperatures that Zantac may experience during distribution, storage, and handling by consumers. Additionally, the FDA found that the older a ranitidine product is, the higher levels of NDMA it contained.

Because of these findings, the FDA had no choice but to request for the removal and disposal of all ranitidine products on the American market. Due to the potential for Zantac to contaminate the environment and the water supply, they highly recommend following the disposal procedures as disclosed on the drug’s packaging. Additionally, they asked those who were still taking ranitidine and Zantac to cease regular use, recommending other over-the-counter antacid products.

The findings from both the third-party lab and the FDA investigation seem to strongly suggest that Zantac and other ranitidine products are not unsafe due to environmental factors. On the contrary, ranitidine seems to be an inherently flawed drug that was not as stable as its manufacturers once claimed.

All those who have been diagnosed with cancer after prolonged use of Zantac or other ranitidine products should consult an experienced lawyer as soon as possible to discuss their options for financial recovery. Pharmaceutical companies such as Sanofi failed to properly subject their drugs to comprehensive testing procedures – and as a result, they must now be held accountable for their negligent actions.

Drug companies have an obligation to inform the public about any harmful side effects of drugs they create and market. When a drug maker fails to provide adequate warnings about the risks related to the use of a particular drug, it could be held liable in lawsuits for injuries and damages that may result. Let us help you get a qualified opinion on your potential Ranitidine lawsuit. We will charge no fee unless your case is successful. Contact us today.

Next post From Zantac to Seldane: 6 Major FDA Drug Recalls of the Last 20 Years