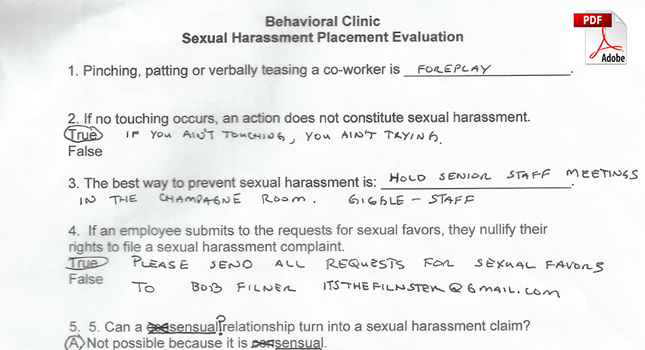 As many of you may remember, the SoCal SCBCCP is famous for treating many well known celebrities including: Jesse James, David Duchovny, Tiger Woods, Snooki & Paris Hilton, to name a few.

A leaked copy of Mayor Filner’s entrance exam (which SCBCCP uses to determine therapy level on a patient-by-patient basis) was accidentally made available to the public by an unnamed source.

We don’t really know or care how it became public, but we are rather suspicious of whether two weeks will be quite enough to cure Mayor Filner’s behavioral issues. One thing San Diego ladies everywhere can rest assured of is, Mayor Filner will probably be placed in an intensive course. But perhaps you all should be the judge of that, we have attached the leaked copy below. Next post Work Injuries and Deaths in the U.S.

How Does Workers’ Compensation Protect You In an Orange County Construction Accident?