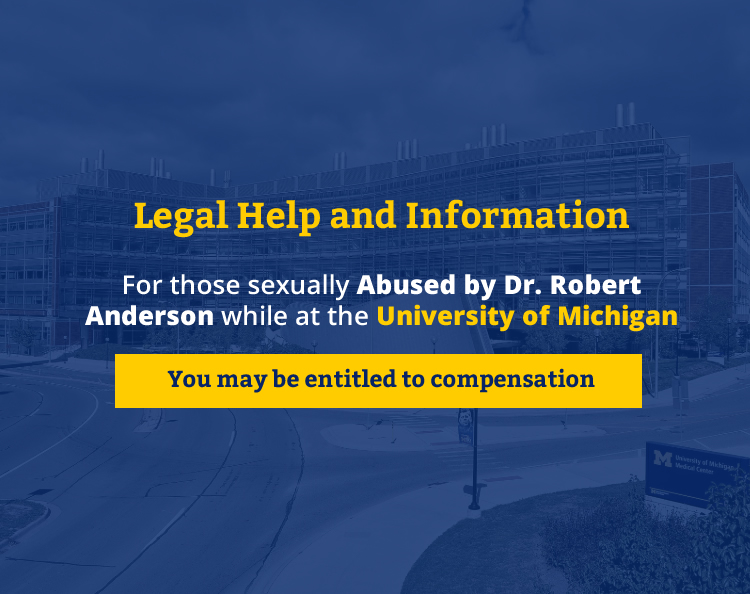 The University of Michigan is facing multiple lawsuits alleging sexual misconduct by Dr. Robert E. Anderson, who held job titles of Director of University Health Service and athletic team physician. Dr. Anderson would use routine medical exams as his opportunity to prey on innocent students. Some of the things he is accused of includes:

Many student athletes at the U of M were subjected to “routine” rectal exams that he told the patients were medically required. It is likely that there are hundreds of sexual abuse victims of doctor Anderson, based on the over 100 calls already placed to the sexual abuse hotline.

If any of these things happened to you while at the University of Michigan, you may be entitled to compensation.

Lawsuits Filed Against University of Michigan

The first lawsuit filed against the University of Michigan and the UM Board of Regents alleges that the school knew about Dr. Anderson’s actions and attempted to cover it up. According to the lawsuit, the abuse started when the student arrived at UM as a freshman. In the lawsuit against the U of M, it is alleged that Anderson abused a former wrestler on 35 different occasions between 1984 and 1989. There are more lawsuits being filed, including former hockey players, football players and wrestlers. 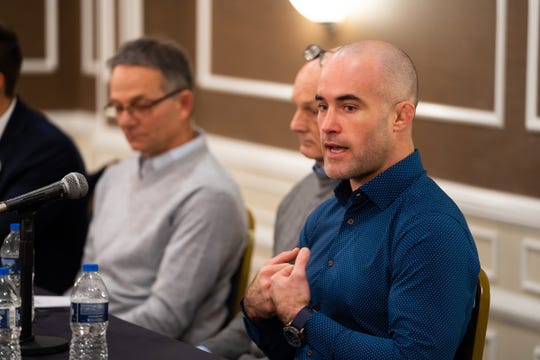 At a recent press conference, former wrestlers Andy Hrovat (a former Olympian), Thomas Evashevski and Tad Deluca spoke about Dr. Anderson’s conduct. Deluca wrote a letter to the school in July 1975 but was ignored. He write another letter in 2018, and that was also ignored.

What to do if You Were a Victim of Dr. Anderson

If you were a victim of Dr. Robert Anderson while at the University of Michigan, it’s important to speak to a lawyer about your case. While many law firms want to handle a high profile case such as this one, it’s important that you choose a law firm with significant experience handling sexual abuse cases involving schools. Additionally, you should choose a lawyer who has a past history of getting large verdicts or settlements handling college sexual abuse cases. The athletic department and school knew about the sexual abuse and chose to try to cover this up, instead of doing the right thing and taking allegations seriously so that this wouldn’t happen to other victims.

Attorneys handling these cases will provide you with:

There are many factors to consider when it comes to hiring the right lawyers for handling a case of this nature. Anytime you have a high profile sexual abuse case against a powerful institution like the University of Michigan, you can be assured that the institution will have a powerful team of lawyers on their site. For this reason, you should choose a law firm that has:

Considering they have the largest per person settlement average in the country when it comes to victims of sexual assault, we highly recommend the University of Michigan sexual abuse lawyers of Mike Bomberger and Steve Estey to handle your case against the U of M. They are already representing multiple people against the University of Michigan, as mentioned in multiple news sources such on ABC News, Mlive and Bloomberg, so they are already familiar with the details of this case.

The firm serves clients nationwide. While many U of M graduates live in Michigan, the firm is also accepting cases from residents of California, Illinois, New York, Florida, Ohio, Texas, Massachusetts, Virginia, Maryland and anywhere else in the country.

Confidentiality for Those Who Want to File a Claim

It’s important to know that you can remain completely confidential throughout this process if you wish to file a lawsuit. Attorneys can file a claim as John Doe on all court filings and will remain anonymous if you prefer.

Michigan State: The University agreed to a $500 million dollar settlement after Doctor Larry Nassar was found to have sexually abused hundreds of women and girls.

USC: Campus gynecologist George Tyndall allegedly sexually assaulted girls on campus for many years. A lawsuit was filed and resulted in a $215 million settlement. Additionally, males students are also suing claiming they were sexual abused by campus physician Dennis Kelly.

Previous post Who Pays For Medical Care After a Car Accident?

About the Author staff