The Top 5 Prescription Drugs Being Abused by Teenagers 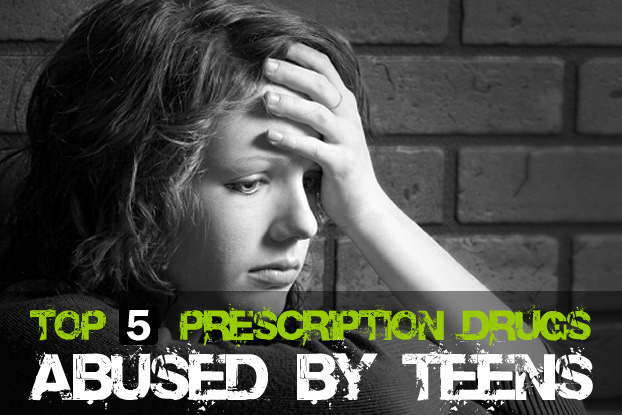 Each day for the past decade about 6,000 Americans have started to misuse prescription drugs — about a quarter of these are kids and teens. The alarming rate at which teenagers are abusing prescription drugs has given way to national concern for a growing epidemic. Teens now account for more than one-third of prescription drug abusers, and year after year that proportion rises substantially.

Painkillers rank number two behind marijuana in drugs abused by American teens, and are the number one drug of choice for 12 and 13 year olds. Adolescents ages 12-17 years old abuse prescription drugs more than ecstasy, heroin, crack, cocaine and meth-amphetamines combined, and two-thirds of them begin abusing drugs not prescribed to them before the age of 16.

Teens are turning to prescription drugs now more than ever, and abandoning illicit drugs at a rate of more than 23 percent over the past ten years. The death toll from overdoses of prescription painkillers has more than tripled in the past decade, as there was a 91% increase in prescription drug poisoning deaths among teens aged 15-19 between 2000 and 2009.

More than 70% of teen prescription drug abusers obtain the drugs from a friend or relative. According to the Center for Disease Control, “enough prescription painkillers were prescribed in 2010 to medicate every American adult around-the-clock for a month. Although most of these pills were prescribed for medical purposes, many ended up in the hands of people who misused or abused them.”

There are various reasons that kids and teens turn to prescription drugs – they range from improving academic performance, to fitting in, losing weight and most commonly, partying. At many high school parties pharmaceuticals are more popular than alcohol. There is a misperception that prescription drugs are safer than street drugs and alcohol because they were prescribed by a professional, and the dangers are concealed by the Rx on the label.

The five most popular prescription drugs that are being abused by teenagers: The most common prescription drug abused by teens. This is a brand of narcotic pain reliever that contains the extremely powerful opioid Oxycodone, and has twice the potency of morphine. While all prescriptions can act as gateway drugs, opioids are especially dangerous because of their ever-growing link to deadly illicit drugs. Because of their opioid similarity, this drug has very similar effects to heroin. The euphoric high is so intense, yet the habit is so pricey that when the drug runs out they turn to inexpensive street drugs. Heroin is no longer a drug of the rockstars and the homeless, but our youth is making that dangerously fatal turn more and more often due to their dependence on opioids. This is a central nervous system depressant that one out of five teenagers has experimented with. Vicodin is more casually prescribed and more readily available than ever, and teens are generally able to get their hands on this depressant more easily than alcohol. Vicodin contains a high risk of overdose, dependence and addiction. Many teenagers don’t understand the potentially deadly risks of pairing Vicodin with alcohol and other medications. This amphetamine that is prescribed for attention deficit hyperactivity disorder is often coined the “good grade drug” because of its performance-enhancing qualities. While non-ADHD teens typically use this drug to improve concentration and to better test scores, the negative consequences are infinite. Adderall can create effects of anxiety, sleeplessness, mania, paranoia and even full-blown psychosis. Adderall has even been linked to heart failure and sudden death.  Frequent use can also lead to unhealthy weight loss as many people take Adderall as a weight loss drug since it kills your appetite. This benzodiazapine is primarily prescribed to treat anxiety disorders. While it can be effective and provide relief when taken as prescribed, the drug is highly habit-forming and carries a risk of overdose. Similar to Vicodin, combining this depressant with alcohol or other medications is particularly dangerous and can lead to death. This is another benzodiazapine prescribed by physicians to treat anxiety and panic attacks. It is also used as a muscle relaxant and sedative. Valium provides teens with a soothing, calming experience. Twenty-one percent of teens believe that their parents wouldn’t be concerned if they were caught abusing prescription drugs like Valium. Withdrawal and recovery from Valium is dangerous. When a user stops using the drug, the brain wakes up too suddenly and can cause an urgency that can spiral into seizures.

Prevention begins with the parents. Adolescents tend to have the mentality of “If mom and dad use prescription drugs, why can’t I?” This outlook is different from “If mom and dad have wine with dinner, why can’t I?” because teens widely understand that they are legally underage and are lawfully unable to consume alcohol. However, the legal restrictions when it comes to prescription drugs are less clearly defined. When parents do have prescribed medications, they should keep them locked up. Currently, only about two-thirds of parents have had a conversation with their child about the dangers of prescription drugs, and with the growing epidemic it is crucial that all parents have that discussion.