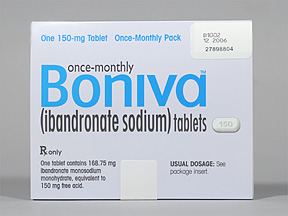 Have you been injured by the osteoporosis drug Boniva?

Boniva is the brand name of the generic drug, ibandronate sodium, and is sold and manufactured by Hoffman-LaRoche and GlaxoSmithKline, Plc.  It is used to treat osteoporosis and hypercalcemia.  It was approved by the FDA in 2003.

Boniva is in a class of bisphosphonate drugs, and is prescribed most often to post-menopausal women to reduce bone degeneration, in a process called “resorption.”  The drug does not inhibit bone mineralization, and the body has not shown to absorb the drug well, causing the manufactures to change the method in which it is taken.  Currently, Boniva is sold in 150 mg oral tablets taken once a month, and patients must fast both before and after taking the drug.  An earlier version of Boniva, 2.5 mg daily dosage, was removed from the market for safety concerns.

Side effects associated with Boniva

Although some changes have been made to the drug, Boniva is still causing side effects, some very serious and possibly life-threatening.  The FDA issued a warning in 2010 regarding the dangerous side effects associated with Boniva, but no recall was put into place.  The most serious side effect that has been reported with Boniva and other bisphosphonates is osteonecrosis of the jaw, ONJ.  This condition is a painful and disfiguring disease of the jaw bone, resulting in the death of one or both of the jaw bone, upper and lower.  In many cases, the jaw bone must be removed.  The symptoms of ONJ include:

Boniva has also been linked to sudden bone fractures of the femur, which is referred to by the FDA as “subtrochanteric and diaphyseal femur fractures.”  Studies have shown the longer a patient is on Boniva, the greater risk for sudden femur fracture.  Atrial fibrillation and severe musculoskeletal pain have also been reported by patients taking Boniva.

If you or someone you love has suffered adverse side effects after taking the drug Boniva, you may have a case.  It is important to contact us right away to determine the best course of action for your individual situation.