Severe and Deadly Side Effects Associated with the use of Humira 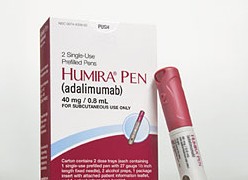 Use of the prescription drug Humira has been linked with cancer and serious infections in some patients.

The prescription drug Humira, the brand name of the drug, adalimubab, is manufactured by Abbott Pharmaceuticals approved by the FDA in 2003 for treatment of rheumatoid arthritis.  It has since been approved for other autoimmune diseases, Crohn’s disease, and psoriasis.  Humira is a member of the Tumor Necrosis Factor-alpha blocker, also called TNF-alpha blocker, class of immunosuppressant drugs. TNF-alpha binds with cells and can cause tissue inflammation that leads to autoimmune diseases.  The TNF-alpha blocker prevents this binding from occurring, and thus prevents the autoimmune response.

Cancer Side Effects Associated with Humira

The use of Humira has been linked to cancers such as lymphoma, skin cancer, gastrointestinal cancer, lung cancer, breast cancer, and Hepatosplenic T-Cell Lymphoma.  A rare cancer of the white blood cells, Hepatosplenic T-Cell Lymphoma is an aggressive and dangerous form of cancer that has been seen more and more in young people who are using Humira to treat juvenile arthritis, Crohn’s disease, and ulcerative colitis.  This phenomenon has resulted in the FDA issuing warnings of developing cancer.  The original study of Humira done to determine consumer safety was done on 2,070 patients, of which several developed cancer, and one died.  The rate of developing cancer was significantly higher in those using Humira versus those on the placebo treatment.  This information was not included in the initial safety warnings regarding the use of Humira.  The Mayo Clinic released a study done in 2006 that concluded patients who take Humira are three times more likely to develop cancer than those who do not, and the higher the dose of Humira, the higher the likelihood of development of cancer.

A permanent degeneration of nerve fibers, known as “peripheral neuropathy” is a known side effect of the drug Humira.  Symptoms of peripheral neuropathy are numbness, tingling, or constant pain, which can be extremely detrimental to one’s life style.  A study published in 2006 released evidence of a link between nerve damage and the use of Humira, but Abbott Pharmaceuticals did not include the extra safety warnings about nerve damage on their re-launch of Humira in 2007, for the treatment of Crohn’s disease.

Because Humira is a TNF blocker, sometimes there is an increase in auto-antibody levels in the blood, which may result in peripheral neuropathy.  Symptoms of specific form of peripheral neuropathy, called mononeuritis multiplex, or MM, include severe fatigue, loss of sensations, weight loss, loss of bladder control, paralysis, weakness, tingling or pain.  The condition known as MM occurs when at least two separate nerve areas are damaged.

Serious Infection Side Effects Associated with use of Humira

Tuberculosis (TB) is one serious infection that has been linked to the use of Humira.  TB can be lethal, and is caused by mycobacteria.  TB is a contagious disease that spreads through coughing, sneezing, and other forms of spreading the bacteria through the air.  TB generally infects the lungs, and symptoms include coughing.  It can also spread to other areas of the body as well.  Classic symptoms of TB include a chronic cough, blood tinged sputum, night sweats, fever, and weight loss.  In the past, this disease has been called “consumption.”  Treating tuberculosis is difficult and time consuming, requiring several doses of antibiotics over an extended time period.

If you or someone you love has suffered severe or debilitating side effects that you believe is due to the use of Humira, you may have a case.  It is important to contact us right away to determine the best course of action regarding your personal situation.