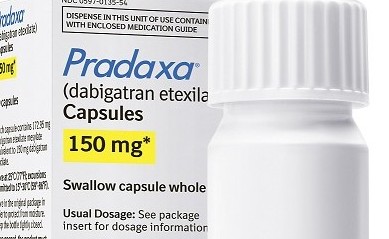 Have you suffered serious bleeding after taking the drug Pradaxa?

Pradaxa is the brand name for the drug dabigatram, and is prescribed to help prevent strokes and atrial fibrillation.  It is thought that Pradaxa is responsible for hundreds of deaths worldwide.  The bleeding caused by Pradaxa is unable to be stopped in traditional methods, and a patient is likely to bleed to death before Pradaxa can be removed from the system.  The most recent example of death caused by Pradaxa is that of an elderly man on Pradaxa who fell and suffered minor bleeding in the brain.  The bleeding did not stop, because Pradaxa is a blood thinner and prevents blood clots from forming.  The only way to reverse Pradaxa is through dialysis, which takes up to three hours.  The man died from the brain hemorrhage before the bleeding could be stopped.

The FDA approved Pradaxa in 2010 to be used to prevent strokes associated with atrial fibrillation.  Atrial fibrillation is a condition which may cause blood to pool in the heart and form a clot, which may be pumped to the brain, causing a stroke.  Pradaxa works by not allowing the blood to clot.  It inhibits the enzyme necessary for clots to form, thrombin.  Unfortunately, patients have found that clots are not forming even when needed while on Pradaxa, and patients are bleeding to death from minor injuries that should be able to be stopped.  The effects of Pradaxa cannot be simply reversed as some other blood thinners can, such as warfarin, with a dose of Vitamin K.  Research has shown the only effective reversal or removal of Pradaxa from the patients system is by dialysis, which is often too slow to help patients in emergency situations.

Side Effects Associated with Pradaxa

The most serious and possibly deadly side effect of Pradaxa is internal bleeding.  Some trials have found that up to 16% of patients taking Pradaxa will experience bleeding.  Other side effects that have been reported are:

Some of the symptoms to look for involving internal bleeding are:

If you have suffered severe side effects such as bleeding after taking the medication Pradaxa, or have lost someone you love, you may have a case.  Contact us immediately and our attorneys can review your situation to determine the next steps.