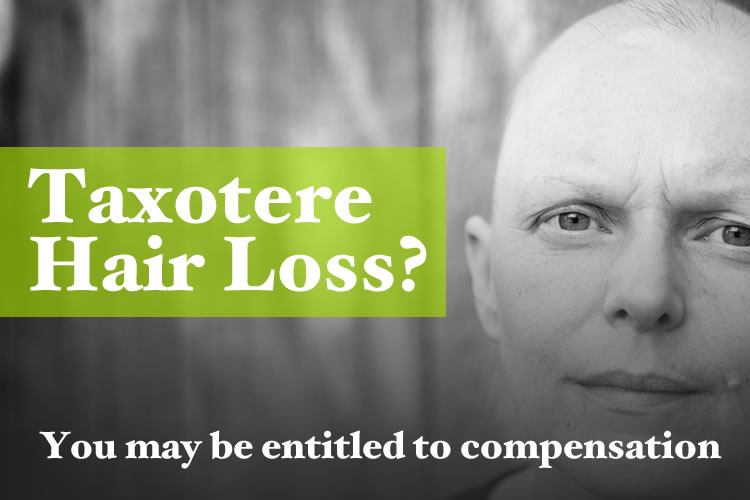 Side effects of Taxotere

If you are looking to file a Taxotere lawsuit, you are not alone. Many women undergoing treatment for breast cancer are taking the chemotherapy drug Taxotere and are now seeking legal help. This medication has serious side effects, including permanent hair loss (alopecia). Lawsuits are currently being filed against Sanofi-Aventis, the makers of this medication. If you would like a case review from a Taxotere lawyer, contact us today for a free consultation.

If you have suffered harm from taking Taxotere, you may be entitled to compensation for:

-Loss of quality of life

-Other costs associated with the medication side effects

Get Help from a Taxotere Lawyer

If you have suffered permanent hair loss as a result of being prescribed Taxotere to treat your cancer, you are likely entitled for compensation. Drug companies have billions of dollars at their disposal, so it’s not a fight that one person can win alone. An experienced drug product liability attorney can help you win the battle.

There are many situations of drug product liability in which a lawsuit would be appropriate; even a drug being approved by the FDA does not exempt the manufacturer from claims against them. A civil claim can be filed in court, which could very well become a mass tort or  class action lawsuit. A lawyer can help decide where (in a state or federal court), when (if there are others, a lawyer can find them) and for how much damages (based on loss of quality of life and/or medical expenses) to file the claim against the drug manufacturer.

The length of the settlement or trial process and how long it takes to receive compensation varies greatly from one case to the next. Bottom line, an attorney will preserve your rights and fight on your behalf for fair compensation. Contact the i-lawsuit.com team to get in touch with an experienced Taxotere lawyer today.

Cancer treatment is often painful and can have serious adverse effects on a person’s body. These effects – such as nausea, vomiting and hair loss – are usually temporary in nature. However, many cancer patients have found that, after taking the chemotherapy drug Taxotere,  these side effects can become permanent. As a result, Sanofi Aventis, the makers of Taxotere, is facing lawsuits for not warning patients about the permanently debilitating side effects of the drug.

Chemotherapy drugs can be administered in many forms; through pills, shots, or even creams, but most are given to the patient intravenously. The length at which these are taken – several minutes at a time – ensures that the drug circulates throughout the entire blood system. There are many different medicines for the same cancers, but Taxotere is relied upon heavily by doctors to treat specific diseases.

Taxotere (docetaxel) is a chemotherapy drug which has been approved for use in the treatment of breast cancer, non-small cell lung cancer, advanced stomach cancer and metastatic prostate cancer, and is given intravenously to the patient. It interferes with cancer cell growth in the body, and is used in combination with other chemotherapy drugs. It’s usually given as a last resort if the first round of chemo drugs don’t work, or if the cancer has spread to the lymph nodes.

This happens if the cancer doesn’t respond to doxorubicin, whose uses are the same; killing cancer cells by limiting their ability to divide and reproduce. Most commonly given to breast cancer patients, Taxotere is supposed to contribute to a better quality of life for the patient. Despite that goal, it’s main ingredient requires solvents to be absorbed into the bloodstream, which makes the drug difficult to tolerate for many cancer patients.

Taxotere is the route many patients and doctors choose to treat breast cancer because of the convenience; it only needs to be taken once every three weeks, as opposed to the once weekly necessity of many other chemo drugs. It was approved by the Food and Drug Administration (FDA) for use in the U.S. in 2004, and by 2009 was turning a $3 billion profit for Sanofi. However, the adverse complications of Taxotere may be greater than what patients made aware of and far outweigh the benefit of convenience.

Chemotherapy treatment, no matter the course or dosage, has its downfalls. Killing cancer cells means that a lot of other cells might die too, which is why your hair falls out or your toenails pop off. The radiation induces nausea and vomiting, as well as extreme exhaustion. Yet, these side effects are supposed to be temporary. Instead, patients taking Taxotere are finding them manifest permanently in the form of alopecia, or permanent hair loss. Drugs like Taxotere are one reason by the number of alopecia side effects reported to the FDA has spiked recently.

Alopecia Side Effects Reported to FDA

Permanent hair loss is not the only side effect of Taxotere. Mild to severe complications can arise, and include:

Beyond that, alopecia can bring with it an even darker side effect.  Because it creates a negative self image for the patient, depression is a very real concern with permanent hair loss in women suffering from breast cancer.

Even with the harsh and permanent side effects of the drug, Taxotere is still used by doctors and medical professionals to treat breast cancer at an exceptionally high rate. Data shows that as many as 75 percent of breast cancer patients are given Taxotere at some point during their treatment. One 2012 study of 20 patients showed that 19 suffered permanent hair loss as a result of using Taxotere. Another study found that it only occurred in 9.2 percent of patients, but it’s worth pointing out that study was funded by Sanofi, the makers of Taxotere.

Why Are Taxotere Lawsuits Being Filed?

Despite all of the evidence, Sanofi omitted permanent hair loss from the list of potential side effects.

The lack of proper warning, even though the manufacturers knew about it, is one of the main reasons lawyers are currently filing Taxotere lawsuits, but is hardly the only one. Allegations of covering up evidence of the dangers of Taxotere, improper testing, and failing to even let doctors know about the potential defections of the drug are all present in recent lawsuits against Sanofi. Lawsuits against Sanofi have claimed all of the following:

Patients affected by the drug claim that if they had known about the potential for alopecia, they would have chosen a different route with treatment. Indeed, there are many alternatives to Taxotere, namely taxol. Taxol’s side effects are similar to many other chemo drugs, but are predictable, temporary and treatable. Paclitaxel is another alternative as well that has been noted to be a much safer option.

As every advertisement for a prescription medication states, it’s important to inform your doctor of any over-the -counter medications you may be taking or health factors such as pregnancy or allergies. Voice concerns about Taxotere if the doctor considers it as a treatment option. Knowing the risks and being able to weigh them makes the potential side effects much easier to stomach.

The U.S. District Court in the Eastern District of Louisiana is hearing a major lawsuit against Sanofi. More than 80 claims from 27 separate federal courts have been consolidated into multidistrict litigation (MDL), which means a resolution can be reached faster than if each case were tried individually. These claims being filed together is also known as a “mass tort.” Again, these lawsuits have very little to do with the side effect of alopecia itself, as debilitating as it is. The failure by Sanofi to properly warn users of Taxotere about its side effects and the disregard for patient’s health by Sanofi is why so many people are filing for damages.

The amount of damages being sought by the plaintiffs is unclear, but claims against pharmaceutical companies are usually in the tens of millions. This is technically a product liability claim against Sanofi. Drug manufacturers owe a duty of care to prospective patients. They need to test their product extensively, go through the approval process and warn of all potential side effects. In a product liability claim, the plaintiff(s) assert that there was a failure by the manufacturer to do one or all of these things.

As a comparison, the largest settlement ever in a drug product liability lawsuit was for $3 billion ($1 billion criminal, $2 billion civil) in 2012 against GlaxoSmithKline. They were sued because they marketed their best antidepressants, such as Paxil, for things other than their approved uses. They tried to promote the use of Paxil in teenagers, even though it had been proven that the drug could cause suicidal thoughts in young adults, about which GlaxoSmithKline did not give proper warning.

Who makes this drug?

Taxotere is manufactured by Sanofi-Aventis, and has been on the market since 1996.

What type of cancers is Taxotere used for?

How is Taxotere given?

The drug is given intravenously to the patient; there is no pill form of this drug. Infusion schedules vary, depending upon the type of cancer and the health of the patient.

How does Taxotere work?

Like other chemotherapy drugs, Taxotere is typically give in combination with other drugs and works by interfering with cancer cell growth. These drugs stop or slow proteins responsible for cell division in the body.

Is Taxotere more effective in treating cancer than other chemo drugs?

There are in fact many alternatives to Taxotere, such as Taxol (another taxane). While Taxol’s side effects are similar to those of many other chemo drugs, those effects are predictable, temporary, and treatable. Paclitaxel is another alternative that has been noted to be a much safer option.

Why does Taxotere cause so many side effects – including permanent hair loss?

The problem with Taxotere is that it is so extremely toxic. The main complaint against the makers of this drug is that Sanofi:

Did the company responsibly warn consumers about the side effect of permanent hair loss?

The U.S. District Court in the Eastern District of Louisiana is hearing a major lawsuit against Sanofi. More than 80 claims from 27 separate federal courts have been consolidated into multidistrict litigation claiming that Sanofi failed to properly warn Taxotere users of its side effects and disregarded patients’ health.

How can I find help if I have been harmed by Taxotere?

If you have suffered permanent hair loss as a result of being prescribed Taxotere to treat your cancer, you are likely entitled for compensation. Drug companies have billions of dollars at their disposal, so it’s not a fight that one person can win alone. An experienced drug product liability attorney can help you win the battle.

Are Other Taxotere Lawsuits Being Filed?

In July of 2016, Veronica Smith filed a lawsuit in the U.S. District Court for the Eastern District of Louisiana. According to that complaint, she underwent five rounds of Taxotere treatment, and due to her permanent hair loss, has suffered “disability, mental anguish and distress, loss of earnings and loss of enjoyment of life.” Among Ms. Smith’s allegations are that Sanofi failed to disclose their research into the safety of their drug and failed to provide adequate warnings to prescribing physicians regarding the drug’s side effects.

Find a Taxotere attorney if you want to file a lawsuit

The numbers are of those who have suffered this company’s negligence is growing every day as more and more women are seeking restitution for the permanent damages Taxotere has caused them. If you or a loved one experienced Taxotere hair loss, contact one of our i-lawsuit.com team attorneys to speak with a lawyer today.